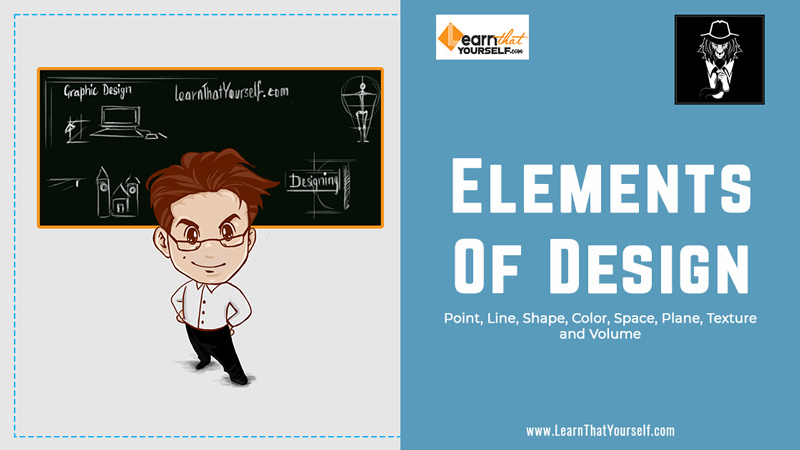 So, if you are going to create a design for a client. Suppose your client has an Architecture Firm. Then first you should research about ‘Architecture’ field and everything in it. But only studying about client’s field and creating a theme or idea is not enough. To be able to implement and execute your idea or theme, you should have a sound understanding of Elements of Design.

If you Google, the term Elements of Design. The result shows Elements of Design as well as Principles of Design mixed together. Even most of results will consider these two topics as similar or single topic which is not the case. They are not at all same or similar.

A point is merely a dot or represented by dot. It is the most basic Element of Design.

It conveys a sense of assurance as it has a fixed position. When used in combinations, it can represent more complicated ideas and there repetition may create a sense of movement.

In drawing or traditional form of art, line is a stroke of the pencil or brush but in Digital form, line is connection between any two points.

The line is a dot out for a walk.

In each of the different way, we draw a line, it gets unique characteristics. Lines also help in creating shapes, forms, patterns, perspective and a sense of continuance.

In general, there are 4 types of lines, defined by their use:

Lines are also useful in:

Lines also have psychological impact with their use as an expression. They convey an emotion (either attitude or action) with which the audience can associate itself.

Other Resources on web to read:

Shape are created by closed contours. The term Contours means, “An outline representing or bounding the shape or form of something” as defined by Oxford Languages. So, we can say Shapes are two-dimensional areas with recognizable boundaries which could be open, closed, angular, rounded, big, small, free-form or ordered.

I found I could say things with color and shapes that I couldn’t say any other way – I had no words for.

Shapes can be used for:

Geometric shapes are mathematical shapes constructed in regular and structured manner. These are the shapes, what most people think of as shapes.

Circles, Rectangles, Rounded Rectangles, Squares, Triangles, Stars, Diamonds are made up of regular patterns that are easy to recognize. Their regularity suggests organization, structure and efficiency. Geometric shapes tend to be symmetrical, hence suggesting order.

They work as building blocks for Graphic Designing.

Organic shapes are the shapes which exist in nature or created artificially. Hence there construction is irregular, asymmetrical and even random. They have more curves and unevenness in structure. They tend to be pleasing and comforting. They are typically representative of shapes found in nature such as a leaves, rocks and clouds.

They are free form, asymmetrical and convey feelings of spontaneity. They add interest and reinforce themes.

Abstract shapes add a concise identity to a design .i.e., it may include symbols, icons, stylized illustrations etc. These shapes have a recognizable form but are not real. They are stylized or simplified versions of organic shapes.

For Example: A stick figure is an abstract shape depicting a person.

We will be confining ourselves to the discussion of some basic Geometric Shapes.

They offer rhythm, movement, happiness, pleasure & generosity. They are seen more as feminine.

They offer energy, violence & anger. They are lively, youthful and hence seen as more masculine.

Color is the most obvious Element of Design. It can stand alone or be applied to other Elements of Design. It creates a mood within the design and tells the story about the Brand.

Colors have psychological and emotional effects, attract attention etc. Every color stands for something different and their combinations can alter the meaning further.

Color is the most relative medium in Art.

Colors are useful for:

We have discussed about colors in our Color Theory Blog post.

What is White space?

White space is also known as Negative space which has became quite a popular concept in recent times. It is also referred as ‘Breathing Space‘. As it provides a break from too information feeding to relax and process the input.

Some inexperienced designer or students may find an urge to fill up the whole design with the information i.e., via text or by other Elements of Design. Hence, underestimating the importance and value of White space.

What’s left out is often just as important as than what’s left in.

Why use White space?

Plan are Two dimension flat surfaces with Width and Length or height but no depth.

They cover an area in any given direction.

They are commonly and prominently seen in works of traditional painters and architects.

Texture in simple words means look and feel of a plane or surface. It’s obvious to use texture when the piece isn’t going to be touched. As a Graphic or Web Designer, you have to rely on the texture to create impression on screen.

It is used to add the feeling of a surface and create design in harmony or in visual equilibrium with our content.

Volume is defined as the amount of space that a substance or object occupies or that is enclosed within a container by Oxford Languages.

For example: A painting has shape and forms but a statue has volume and mass.

4 thoughts on “Elements of Design”